The First Scottish technical outdoor shop for and by women

Outdoor wear for women is a touchy subject, You don’t have to look far to see that there is a gap between the availability of menswear and womenswear.

Growing up in an outdoor background I was heavily influenced by my father’s company Nevisport which he sold in 2008. During the 90s with having the shop you would find me dressed in exclusively 90s grungy fleeces and jackets keeping me unfashionably dry in the Lochaber weather. At that time sections for women were pitifully small. A section in the left-hand side of the still existing Fort William store (which I can happily say now owned by Trespass is much improved). It was the heyday of Helly Hanson and fold down hoods. The section held about four options all of which were black.

During lockdown 2022 I came across the brand called Coalition snow who are an awesome female led ski brand based in Reno, Nevada. I became obsessed with following them online. Seeing a group of women take on the patriarchy within the outdoor world so head on was extremely inspiring and it got me thinking why couldn’t something like that be done in Scotland?

With such an array of outdoor brands on the High Street it is unbelievable to see what the offering is for women. In an entire shelf of outdoor company catalogues I worked out that nearly everyone was approximately 70% men’s equipment an 30% female.

All 15 of the UK’s highest grossing outdoor brands are male owned and run. In a country where only 17% of all registered companies are female owned the industry itself contributes to the gender pay gap. This is why it’s so important to create female led businesses.

Working to influence the market

This being said (as it is true) we do not want to take down the industry but to improve it. Further to creating an accessible space for all women we also hope both indirectly and actively that the existence of a female focused shop will provide further encouragement for brands to increase their female focused offering.

Gaelic and the landscape

As a Gàidheal it is natural that Beinn Nibheis is influenced by my culture.

Beinn Nibheis Was originally named Bean Nibheis meaning Nevis women or women of Nevis, with our logo shaping our decision our brand now reflects the correct spelling of our local mountain.

Gaelic’s connection to the outdoors is unending Every rock formation, bog, hill, bigger hill, Slope, slopier slope, pool and river has multiple words to describe it and though many may choose not to acknowledge it you cannot spend a day on a Scottish hill without using Gaelic whether you notice it or not.

We are proud to be a certified LGBTQ+ owned brand and we want to make it very clear that our definition of women includes LGBTQ+ people. 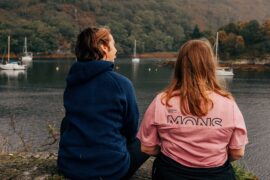 Bana-Ghaisgich – Women In The outdoors

Learn more about us – Our Mission